This is a photo from the Balthazar Korab archive in the Library of Congress in Washington D.C.

Obviously taken on November 4th, 1966 - it is a view towards Piazza Santa Trìnita from the Arno. You can see two figures walking in waist to chest-high water. There are literally of hundreds of slides and photos in this archive that have probably never been seen by the public.

Joe Blaustein's Color Photos of The 1966 Flood of Florence


I was trying to protect the copyright of Joe and the City Archive, but I guess they sent these few photos out in a press release because everyone seems to be using them in the press coverage. There are a lot of articles in the Italian papers this morning which is great - after nearly 50 years Joe's dreams of sharing his images has come true! 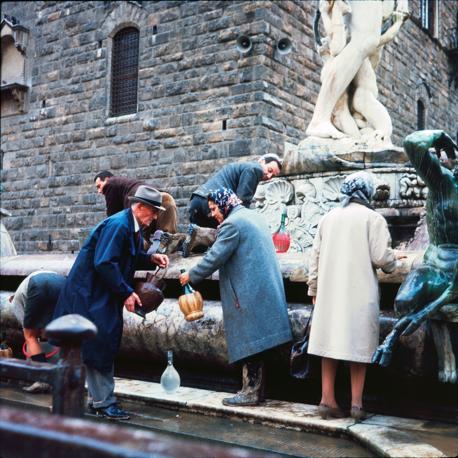 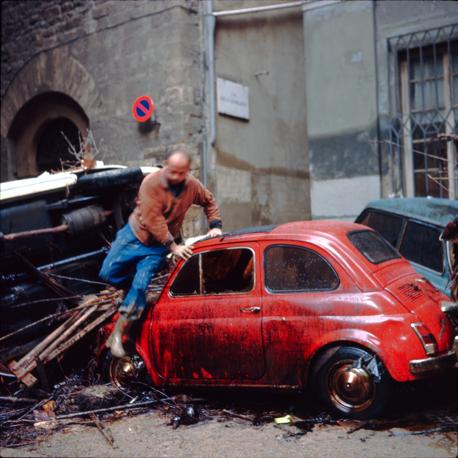 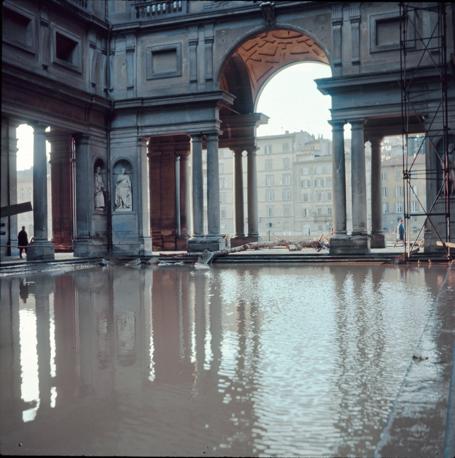 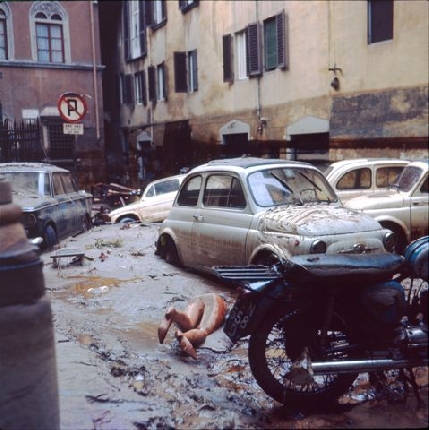 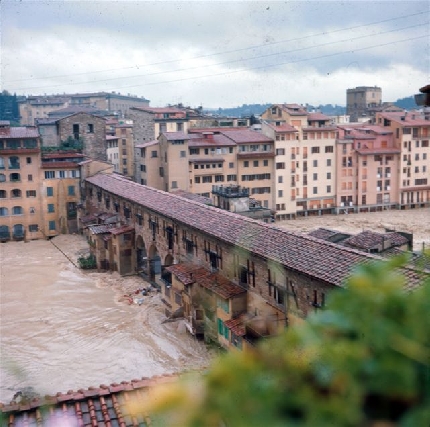 Exhibit of Color Photographs of The 1966 Florence Flood


This Thursday, November 28th (Thanksgiving day in America) at noon, the City Archives of Florence (L'Archivio della città) will present what are believed to be the only color photographs of the 1966 Flood of Florence: Tutti i colori dell'alluvione. (The exhibit itself will take place in the Biblioteca delle Oblate in the Sala Consultazione Sezione Storica, the library is across the street from the archive - PDF of the invite). The images were taken by advertising executive Joseph Blaustein while on a trip to Italy with his then pregnant wife. Luckily for all of us, Joe just happened to have a couple of rolls of color slide film on him (fairly expensive and rare in 1966).

Virtually trapped in their pensione near the Arno (like most everyone in the city), Mr. Blaustein captured images from the pensione windows the night of the flood, and then during the next morning and next day made his way around Florence on both sides of the Arno and took these amazing, historically significant, one of a kind photographs.

He tried (unsucessfully unfortunately) several times in the ensuing years to present the city with his images, but finally a confluence of events made the presentation possible:

I had started this website (Florence-Flood.com) during the second year I lived in Florence (which was the 40th anniversary year of the flood, 2006), and since its inception (and probably due to it being in English) I have received correspondence over the years from many people who were either in Florence during the flood or people who came after and were called "mud angels" - volunteers from all over the world who helped clean and restore books and art works.

Joe Blaustein is one of these people who originally contacted me via this website, and by email he was able to share his story (and what a story - more of which is here) with me and finally some of his images.

To make a long story (from our first contact to the exhibit opening Thursday will be more than 3 and a half years!) very much shorter: via my friends and contacts in Florence, and especially with the help of Paolo De Rocco of Centrica, I was able to get a first meeting and present some of the photos (scanned slides at this point on my laptop) to Carlo Francini who heads the UNESCO office for the Comune di Firenze. Mr. Francini then brought the images to the attention of the Archivio della città and eventually we all met (Mr. Blaustein who was in Tuscany at the time on a teaching trip, Paolo De Rocco, Silvia Gallini and others in Mr. Blaustein's party) with Luca Brogioni and his colleagues at the City Archives of Florence in early 2013. The city archive at that meeting enthusiastically accepted Joe's generous offer of donating his slides to the city of Florence, and started the preparations for the first public showing.

Here are a couple of minutes of Joe and Silvia at the initial meeting with the city archives:

I have to add that there were many more people involved that were instrumental in seeing this all come together, especially the aforementioned artist, film maker, and assistant to Mr. Blaustein Silvia Gallini, whose help, especially with the Italian language going back and forth in endless emails was vital:

Silvia Gallini - this is Silvia's film about Joe: The Dog and The Duck

Sadly (for me), this has finally all come together and I wil not be able to attend as I left Florence in June of this year! I hope one day to return to Florence and see Joe's photos exhbited somewhere - maybe in 2016 for the 50th anniversary of the flood.


From running this website I have had the privilege to receive correspondence from many people who were in Florence during the flood. Last year I had my first communication from Joseph Blaustein. He has a treasure trove of color photographs from the morning after the flood (as well as an amazing personal story), and this year he finally had his old prints digitized (or he may have had them printed from negatives or slides - we have not gone over all the small details yet). He just sent me many of these shots. I only have time to share one now - but they are amazing, moving, vivid images of the flood - and may be some of the only color images anywhere. Please respect his copyright and his work - if you share these photos elsewhere on the web, kindly keep the copyright notice on the picture.

The photographer recalls that the people on the street in the morning were like zombies - too in shock to talk - they surveyed the damage in near silence:

The 46th Anniversary of the 1966 Flood of Florence


Today marks 46 years since the great flood of 1966. There are many events happening in Florence at the moment, and at one of them, Florens2012, the RFK Center Europe will host an aperitivo dedicated to the memory of Ted Kennedy, "angelo del fango nel 1966".

I am publishing below some photos and memories sent to me from a soldier in the U.S. Army who at the time was stationed at Camp Darby. He was a driver, and ended up helping to move items affected by the flood (the following has been edited a bit for spelling and grammar):

I was sent up to Florence along with another GI and we got there several days before the main group of 10-12 arrived. Signed in at the Embassy and I do not remember what we all did.

In visiting Florence prior to the flood, we met the lady who owned a pensione and enjoyed all the area around the Ponte Vecchio.

Anyway, I had and was driving a 2.5 Ton truck and somehow I was around the Uffizi (a place I knew well) and this dude dressed in black wanted me to haul some books to a dry place and he said it would take an hour or so. After a while and his continued asking, I agreed and students loaded the books and away we went. The hour turned into all afternoon and I got caught by an US army Captain and he chewed my ass out about what I had done.

The next morning at the embassy this church dude shows up wearing black but he had red stuff also. He talked with the Captain and I hauled books for the next few weeks. I was not allowed to touch the books and mostly students did the loading and unloading.

After several weeks I left Florence and took an 18 Wheeler load of sleeping bags to some place way up north, but on a Sunday when trucks where not allowed on the main roads, that was an experience.

I was one of the few soldiers (10) at Camp Darby that had driver's licenses for any vehicle and especially big trucks, therefore I got to go a lot of places like, Verona, etc. 
Here is the second set of photos from the Mud Angel "Mary". The first set of photos are here. It is very exciting and an honor to publish these images, I hope you enjoy them.

Photos from a Mud Angel


I was very honored to get an email, nearly two years ago, from Mary - a real "Mud Angel" - who offered to send me her photos to post here on Florence Flood. It has taken way too long to do this, but here they are - a real treasure trove of people coming together to save some of the treasures of Florence - specifically books in this case. The photos here are actually from February 1967, a few months after the flood - this description is from Mary:

"...I was in Florence working on the books from the National Library that were brought in from the tobacco barns in the countryside.

I was there at least a week and we worked every day at Fort Belvedere, primarily scraping mud from the pages that had been unbound by the Italian students, packaging them up & lowering them down for transport to the railway station for washing.

The people I was working with were all sorts (students, airline stewardesses on layover, etc.) but primarily decisions were made by the British bookbinders.

The weather was good enough that we sat outside for lunch and were enthralled by the descriptions of the problems they encountered "the last time we rebound the Book of Kells!!"

(This is the first half of the photos, I will be posting the rest in another album closer to the 45th anniversary of the flood on November 4th, 2011)

Photos of the Florence Flood of 1966


A lot of the photo sites we have linked to over the last couple of years are now gone - here are a couple of live ones:

Florence flood photos from About Florence

Here is a post on a message board that has several good black and white photos of the flood - I don't know about the copyright of these images, some of which seem familiar. There are a couple by the train station and the SITA station I have not seen before though.

On Saturday Florence was buzzing with various exhibits, memorials and events surrounding the remembrance of the flood. Many shops had their own photos up in their windows, which was very interesting since many of the pictures are originals and not the shots you see over and over again in books and old postcards. The lavanderia on Via dei Neri had several interesting photographs, including one of the street decorated for Christmas that year - Christmas 1966 in Florence must have been a pretty somber event.

There was a mass at Santa Maria del Fiore, and a special exhibit by David Lees, a photographer for Life magazine at the time of the flood, opened in the Palazzo Vecchio. This exhibit is very moving and very well presented - I will be going back again before it closes.

At night, the banks of the Arno were lit, as were the bridges. The Ponte Vecchio and Ponte alle Grazie were bathed in a eerie purple light, and there were fog machines on the banks of the river producing a mysterious effect.

The Palazzo Vechhio and most of the statues in the Piazza Signoria and the Loggia dei Lanzi also had the purple light effect, while in the loggia itself there were video and slide presentations with scenes of the flood and the clean up efforts, set to some moody, techno-type music.

This is really just a cursory review of some of the things that happened on Saturday - there was also a large exhibit in Piazza Santa Croce of all the civil services, and there were speeches on the steps of the Palazzo Vechhio, as well as a full day itinerary that took place inside during the day for Mud Angels, etc. We'll keep posting news and updates as we here about things.

All entries in Photos (alphabetical listing)